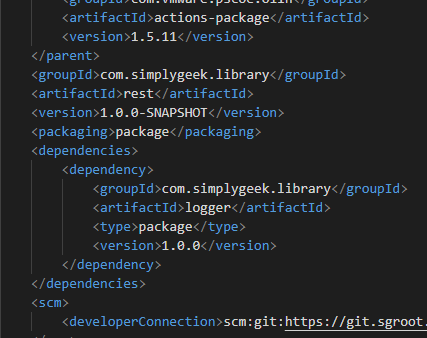 END_OF_DOCUMENT_TOKEN_TO_BE_REPLACED

In my previous post on Deploying vRealize Build Tools To Allow Infrastructure As Code for vRA and vRO, I covered how to set up the CI infrastructure and your developer workstation, in preparation for managing your vRO code as projects with Visual Studio Code and Maven. In this post, I will explain how you can work with your existing code base and manage it using the build tools. A major part of this will be creating and managing new projects that will map to our existing code in vRO.

Once projects have been created, I will detail how Git repositories can be used to store and manage your vRO code, and then we can map your project dependencies and allow development teams to work collaboratively, without risk of overwriting the work of others (a major problem when developing using the vRO client). Git is going to bring some very useful processes and methodologies to the table such as branching, tagging and merge conflict resolution.

I also want to point out that I am currently only focusing on Actions, as I believe this is where all your code should exist. I will have followup posts that will cover strategies for managing Workflows and other items.

One thing that I didn’t cover in my previous post, was setting up Git. I purposely reserved this topic for this post, as it was more relevant. To start, you will need to have a GitLab server deployed that can be used to create the repositories for storing your vRO projects. You can use GitHub if you so wish, it doesn’t matter too much, but using GitLab doesn’t require that your environments have access to the Internet. GitLab also allows you to create groups to organise multiple repositories, which is going to be useful.

You should be using your user account when working with Git and not the default root account. So log into the admin area and create a new local account for your personal use. Alternatively, you can also configure GitLab to allow users from Active Directory to log in, you can use the guide provided by Git here.

Once you have a Git user account set up, you will need to create a Personal Access Token. An Access Token can be used instead of a password when authenticating with Git over HTTPS. This will provide safer storage of user credentials in the Git configuration files.

Click on the profile icon on the top right of the page and select Settings: 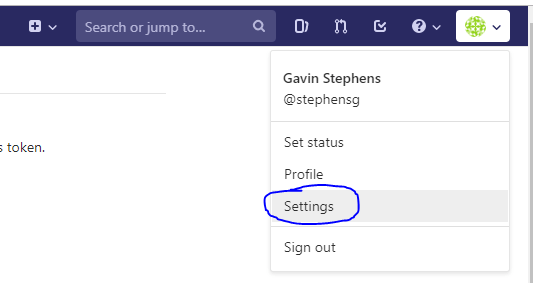 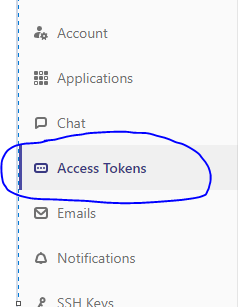 On the ‘Add a personal access token‘ page, give the access token a name and the ‘write_repository‘ permissions. Set an expiry date if you wish, or leave blank to never expire. 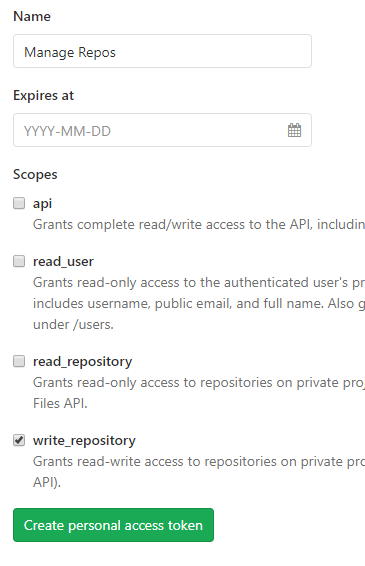 Once you click ‘Create personal access token‘, the token will be displayed. You will need to copy and save this token somewhere safe as you will not be able to view it again. If you lose this token, you will have to create a new one to replace it.

A Group allows multiple projects/repositories to be created under a single namespace. This is useful when a project spans many repositories and you need to keep these together so that they are easy to locate and manage. Our vRO projects will be using multiple repositories, therefore we’ll great a Group for these. A Group also simplifies granting access to projects, as collaborators can be granted access to the group and inherently, the projects it contains.

To create a new group, select ‘Groups‘ from the main menu at the top and then select ‘Your groups‘.

Click the ‘New group‘ button and give your group a name and settings that you require (I simply called my group ‘vRO’).

We will create all vRO projects under this new group.