When I was building vRA 7 and figuring everything out, at some point I set the ‘Default machine prefix‘ for the Business Groups. When you first create a Business Group, setting the default machine prefix is optional; However, if you do set this value then there is no way to unset it, which I find extremely annoying. As I don’t currently use specific prefixes for business groups, I was feeling a little OCD having to set this to some other prefix value.

I was able to ignore this for a while until I installed the Custom Hostnaming Extension for vRA7 by Dailyypervisor. This extension is really awesome and has helped me massively overcome my requirement to create dynamically generated hostnames. The hostnames are based on our internal naming convention and I make good use of Custom Properties for this. For testing, I simply created a very basic custom hostname scheme ‘{LOC}-GSTEST{##}’, with {LOC} being set on one of the vSphere endpoints.

At first this appeared to work just fine, until randomly some machines would be provisioned using a different hostname. The other hostname was based on another machine prefix that I had created previously and was configured as the default for the Business Group, which was ‘ES-VWOI-MANA##’. The image below shows the results of 7 machines provisioned using the custom hostname extension. 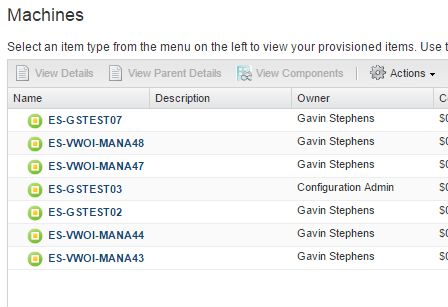 Clearly what is happening here is that on each provisioning attempt, it is randomly selecting a different machine prefix. What is also interesting is that both prefixes get incremented. In fact, that’s another issue with having a default one set for the business group (or even within the Blueprint), is that they are ‘allocated’ and incremented even before the EBS is used (which is when the custom hostnaming extension kicks in, at the requested stage, which is still AFTER the allocation). I have had a small look at the code for the workflow and can see that it’s identifying that the custom hostname scheme already exists, but I haven’t yet looked into why it’s setting the wrong one.

I figured the easiest workaround for now would be to simply remove the default machine prefix from the business group and make sure no one accidently sets it. But this is when I realised you can’t do that by simply editing the group via the IaaS interface. To cut a long story short, you have to manually remove this on the database, both the SQL database used by IaaS and the PostGres database used by vRA.

END_OF_DOCUMENT_TOKEN_TO_BE_REPLACED

So today my heart sunk when I tried to log into the vRA 7 IaaS portal and was presented with this lovely message:

Now, I had just recently attempted an upgrade of vRA 7.0.1 to 7.1 and failed miserably (more on that in a later post) so I had to roll back all of my changes (reverting snapshots, etc.) and brought all the services back. All seemed fine until I tried to log into the IaaS portal.

One of the first things I checked was the services registration on the vRA VAMI interface (Services tab). I thought perhaps the order of events of the rollback had skewed something. I observed the following:

So clearly something was afoot. I did a little digging and came across the following KB article:

The interesting thing here, is that just a few hours before, I added a proxy server to the VAMI configuration in order to get the updates I needed from https://vapp-updates.vmware.com. As per the KB article I inspected the following log file: